Look up, way up: beetles and flies in the tree tops

Most insect collectors and other insect fans tend to walk through a forest with their eyes focused on the ground at their feet, or low undergrowth, or sunny spots above the path ahead. That’s where a lot of the insects are. But not all of them. There’s a whole world of diversity up in the forest canopy. There is a buzz of insect activity up there; it’s just hard to get up there to see it. 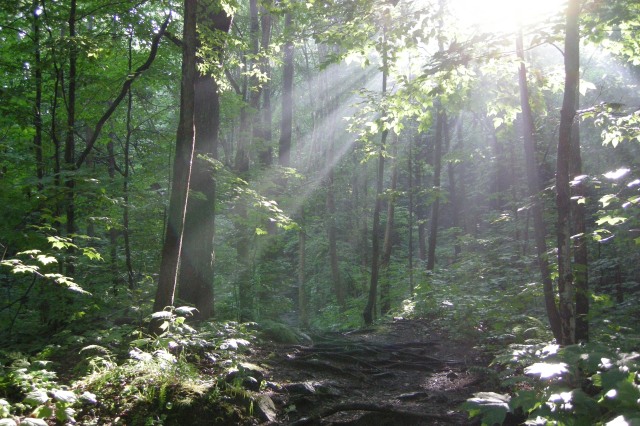 A forest has many layers.

To get a sense of insect diversity in forest canopies, we either have to bring them down to us (by spraying knock-down insecticides into the canopy, for example), or we have to go up there and collect them ourselves. In a new publication that’s just come out in the journal Environmental Entomology, we used the second option to explore the changes in beetle and fly diversity as we go from ground level up to the canopy in maple forests here in southern Quebec.

The paper, entitled “Vertical stratification in beetles (Coleoptera) and flies (Diptera) in temperate forest canopies”, was a true collaborative effort that had its genesis a few years ago when Maxim Larrivée was doing Ph.D. research with my colleague Chris Buddle. Max was exploring arthropod diversity in temperate forest canopies using a mobile canopy lift that let him ride a bucket (more or less) up to the upper canopy of beech and maple forests around Montreal and sample arthropods. During the summer of 2008 two very keen undergrad students were working in our labs: Kristen Brochu with me, and Katleen Robert with Chris. We decided to have them do additional sampling for a new project, taking advantage of the mobile lift to set insect traps at different heights in sugar maple trees. The question was simple: how does the diversity of beetles and flies (two abundant insect groups in forest canopies) change as we go from near ground level, to the mid-canopy, to the upper canopy of the forest? 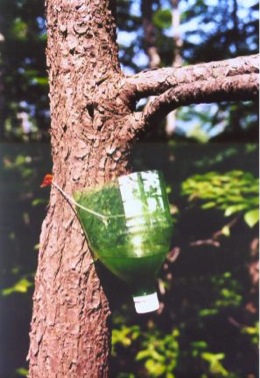 A trunk trap in action. Insects go in the top; results come out the bottom.

The question may have been simple, but the field work and lab work was daunting. The window traps and trunk traps (essentially modified soda bottles) yielded large volumes of specimens that had to be prepared, mounted and sorted. Katleen and Kristen put in a huge amount of time and effort sorting through the beetles and flies, respectively — time consuming work that’s absolutely necessary if you hope to see patterns of species changes as you go up in height. After some preliminary analyses both students moved on to other opportunities as grad students (this happens in the highly mobile science game) and the manuscript went dormant until a couple of years ago when Ph.D. student Dorothy Maguire, who also has an interest in canopy arthropods, dusted it off and started running new analyses on the data. And that was what it took to get us back into research and writing mode and get the thing submitted.

We identified more than 160 species of beetles and 125 species of flies. However, this is a subset of the true species richness because we could not confidently put species or genus-level identifications on a few of the taxonomically challenging families (cecidomyiid gall midges, chironomid midges, rove beetles) in the context of this study.

But overall species and specimen numbers are just one measure of diversity. In both orders we found differences in the community structure at different heights. This means that even if the overall species diversity didn’t change much, there were likely very different species near ground level versus the canopy. And the raw data back this up — some species were collected only in the understory; some only in the upper canopy.

So, if you go to the forest and want to know who lives there, you’ll need more than a standard insect net, more than a Malaise trap, more than some pitfall traps. You’ll need to look up. Way up. There are little-known worlds up above our heads, even here in the temperate middle of North America.

4 Responses to Look up, way up: beetles and flies in the tree tops