I’m crossing some lines in the Yukon. I’m searching for dots.

Several lines drawn on maps define the Yukon for me. There’s a straight line across the bottom of the Territory that marks 60° north latitude. To many Canadians, “north” is what’s beyond that line. It’s a line mostly drawn by politicians and mapmakers, but it’s also a line that defines the way people view part of this giant country. In Canada, “North” is a thing.

Farther north, up at latitude 66°33’ there’s another straight line – the Arctic Circle. That one goes right around the planet. It’s a line drawn by astronomy. At that line, the sun doesn’t set on the longest day of the year, and it doesn’t rise on the shortest.

Between those two, there’s a squiggly, fuzzy line running more or less east and west. It’s the tree line. It’s a line drawn by biology and geology and climate. South of tree line there’s forest; north of tree line there’s tundra. But like most things biological, it’s not quite that simple. When you zoom in far beyond the level of that giant map of Canada on the wall, things get messy because tree line is spotty and broken and moving, depending on the interactions of living and non-living things. Patches of trees come and go up here. It’s like they didn’t even bother to look at the map at all. 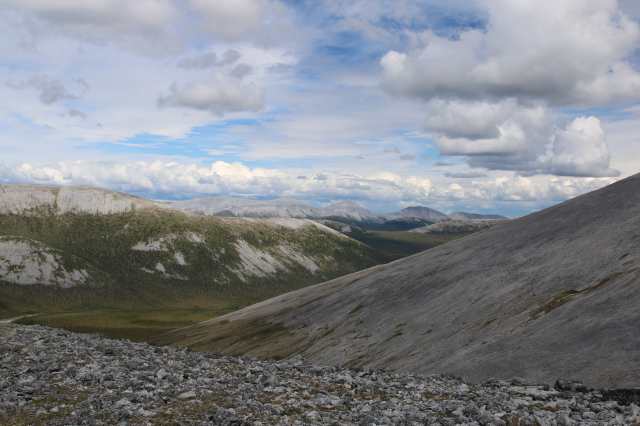 Windy Pass, Yukon. Up on the edge of Beringia (photo: T.A. Wheeler).

The fourth line, the one I’m tracing instead of crossing, is the Dempster Highway – a 732 kilometer, two-lane (more or less) ribbon of gravel running north (more or less) from near Dawson City, up through forests and tundra and then some more forest and then tundra, across the Arctic Circle, across northern rivers, to Inuvik, up on the huge Mackenzie Delta near the Arctic Ocean. It’s a line drawn by road-building crews and the native guides who showed them the best route. It follows old winding paths and carves new straight lines. In some of the straight stretches, the road is also an airstrip (don’t stop there). It winds along rivers, over low mountain passes, and rides on top of a thick bed of rock and gravel laid down over the permafrost. I drive up and down this road looking for dots to add to a map.

I’ve been collecting insects along the Dempster almost every year since 2011. Each year our research questions are a little different, our field crews are a little different, our focus is a little different. This year I’m mostly focused on collecting data for a long-standing project in taxonomy (where the root question is “what is this thing?”) and faunistics (where the root question is “what things are here?”). My main group of interest is the fly family Chloropidae. It’s a diverse and abundant group of little flies that live everywhere from tropical rainforest canopies to deserts to urban backyards to the high arctic tundra. And they play a huge range of ecological roles, from herbivores to scavengers to predators to parasites to pollinators. On my first visit to the southern Yukon in 1997 I started collecting chloropids and I soon noticed how many species there were, how widespread they were, and how many seemed to be undescribed species, or species unrecorded in North America.

That last part – unrecorded in North America – is especially relevant to research in the Yukon, because this part of the continent is a crossroads for species. Many widespread North American species range all the way up through Yukon and Alaska, but this place is also special because when most of Canada was covered with ice for much of the past two million years, a big chunk of Yukon and Alaska were ice-free, part of the great Beringian refugium. Beringia was a gateway for many species to walk or crawl or swim or be carried by wind or animals or water from eastern Russia into North America. And many of them stayed up here. So we know of several species that are widespread through Eurasia but only found in North America way up here in the northwest corner. Because of the glaciers. But, the species we know are only a small fraction of the species that are probably up here, especially in poorly studied groups like insects and other small invertebrates.

So I’ve been travelling the Yukon, stopping along the accessible routes to put out insect traps and sweep the vegetation for flies. And in most places I collect, there are chloropid flies. When I get back to the lab and prepare the specimens, I can identify the species, find out whether they are named or not, and I can put another little dot on a big map that says “this species lives here”. My dots come from my own collecting in the field, but also from samples collected by colleagues, and also from the rich holdings of older specimens housed in natural history museums. All the dots together give us a picture of the diversity of this one family of small flies up here, and when I’m done I’ll have produced a piece of work called The Chloropidae of The Yukon (or something like that; still a working title), that will help us understand a little piece of the biodiversity of this place a little better. And my dots can be combined with other dots of other groups drawn by other researchers, to help draw a very detailed pattern of dots.

So who cares? What’s the use of those dots? Well, those dots drawn by taxonomy and faunistic work are the basis for a whole suite of questions in ecology and biodiversity and conservation. With enough dots, we can define the structure of ecological communities, we can map them onto biotic and abiotic gradients, we can monitor the change in what, and where, those dots are over short time periods (as habitats change) or over long time periods (as the biota of the north has changed during and after ice ages).